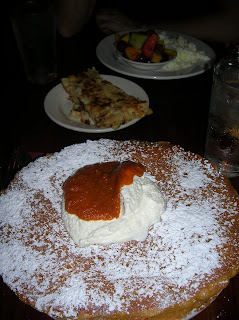 A couple of weeks ago, I was treated to breakfast by Lauren's brother while he was out in Los Angeles on business. When he lived in Los Angeles, he had the chance to eat some of the city's best food, so along with a fantastic breakfast, I got a few great recommendations to try out.

We went to one of his breakfast staples. The Griddle Cafe. The place is known for their gigantic buttermilk pancakes, and sometimes they get carried away with sweetness. Nobody will argue with you, if you try to pass off their "A Time to Love" pancakes as a dessert. The description reads, Enter into a world of Wonder with our streusel, butterscotch chip, and caramel filled "Tis the Season" originals... Topped with powdered sugar, whipped cream, and caramel. (Signed, Sealed, Delivered!)
In order to fully appreciate this pancake, you have to understand what the "Tis the Season" original is. Which just so happens to be, what I ordered. 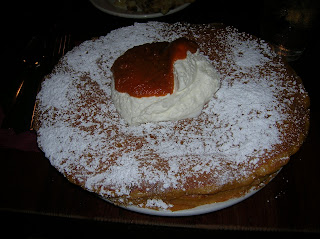 "Tis the Season", pancakes are... "Our "Good Ol' Fashioned" recipe mixed with our own pumpkin pie filling. Topped with real whipped cream and powdered sugar (Everyday is like a holiday at The Griddle!). The Good Ol' Fashioned just refers to their original buttermilk recipe.

They don't lie, it felt like a holiday when I took a bite of the pumpkin goodness, which not only had real whip cream on top, but some of the pumpkin pie filling as well. It wasn't as sweet as a pumpkin pie in the cake part, which was a welcome relief. Anything that sweet would have been overpowering in bulk.

I got the short stack (2), apparently, you can order a single cake, which by the size (bigger than my head and the plate), would have been enough for two. Lauren's brother and I made it through half of it, as he had his own breakfast to eat.

He ordered an eggwhite omelet which came with fruit, and a side of Griddle Potatoes, which was more like a Potato casserole. The Griddle Potatoes were cooked well, and were great with a dash of salt, ketchup or both. Definitely worth getting. 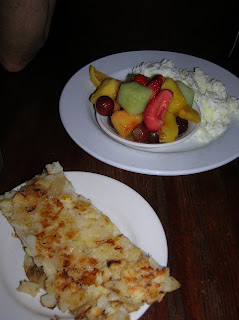 I didn't hear any complaints from his end of the table, which meant we were free to talk about other exciting places to dine and mundane things like the Olympics.

I hear they also have a lunch menu, if that's what you are into. Even though the place is called The Griddle, sometimes you just want lunch food. Even though, I didn't try any of their lunch foods, I don't see any reason why it wouldn't be above par (as in better than the norm, which is different when playing golf, where they use par regularly).

Thank you to Lauren's brother for bringing The Griddle and other Los Angles restaurants to my attention, and if you ever find yourself in Los Angeles, swing on by and give it a try.

are you kidding me, that pancake looks insane!! i also find it really funny how different your two orders were: lauren's bro being a responsible adult and getting healthy egg whites and fruit..... and the food monster, eating a gigantic whipped-cream pumpkin pie dessert pancake for breakfast. hilARIOUS!!

There food rocks - I used to work on Beverly and Robertson so this place was pretty close. Anyone who is a breakfast fan this is the place. Enjoy