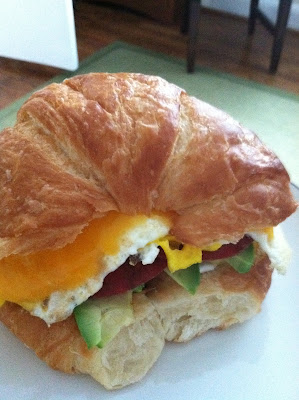 My resolution this year is to blog more, blah blah blah... yada yada. To kick start that, here is our New Year's Eve feast as prepared by Lauren. 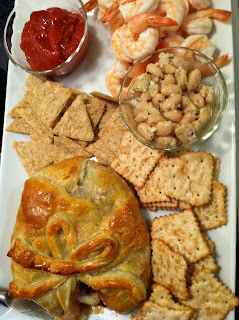 Katy's Grill and Bar - a review

Katy's, or as the new management would like you to know them as, the KGB has been under new management since late July. From the scruffy front, my wife never wanted to eat there before, not much has changed on that end.
However, I had a hankering for some wings, or something fried, and a pile of Free Fried Pickles coupons and grabbed two co-workers and set out for lunch.

We started off with a basket of Fried Pickles, and Onion Rings, and I will break them down one by one.

Fried Pickles. Most of the reason why I was going. I had some great ones in Los Angeles and wanted more. 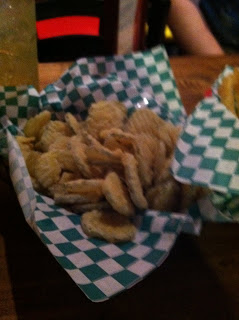 They looked good and the first couple were great. The Ranch bottle they brought (yes, like Ketchup, oh they brought that too), gave a delicious homemade tasting Ranch. The batter was light, but I believe the pickles were a little thick, either that or too many were in the basket. Just too much acidity as we got towards the bottom. I would give them a B-.

The Onion Rings. These didn't look that great. Some of the breading was thin or falling off, so I didn't take a photo. But wow, they impressed. They were some of the best onion rings I have encountered and when I go back will order these over the fried pickles. We eat with our eyes first, but taste doesn't lie. Also good in the Ranch sauce, these get a B+

At this point, one of the new managers/owners had found us on his way out and asked us what we were having. He noticed us looking at their menu left over from the old way Katy's did things.
He explained that while they kept what Katy's did, they are also adding to it and removing the items that Katy's didn't do so well. And with that he handed me the special menu that was tucked away at the far end of the table. 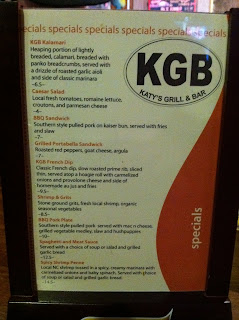 This I was not expecting. Shrimp & Griits, Grilled Portabella and BBQ out of the old Katy's? No sir, this is not your old Katy's. I was coming to get my deep fried Seafood on. So I ended up getting the KGB French Dip and a Fried (popcorn) Shrimp and Fries Lunch Special ($4 from the old menu). I ended up with too much food, and it was all really delicious. Rich got the Portabella and that was well cooked and flavored with the RRP and Goat Cheese he said, Wes chowed down on his Fried Shrimp Sandwich which also looked good. I will definitely go back to see how their specials menu and current menu evolve into something more permanent and something with the KGB style we will come to love.

If you haven't been by with the new management, go give them a try, I know they have fixed the frier oil problem, and deep fry different foods in different oil now so that the wings don't taste like shrimp. Let me know what your favorite is off of their specials menu. 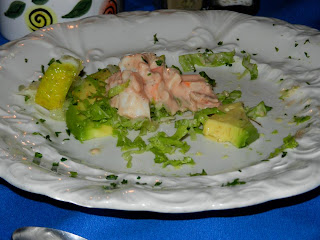 Lobster was in season while we were in St. Lucia and our first night out brought us to Buzz Seafood and Grill. This appetizer of Avocado, Lobster, some sort of very light sauce (probably a citrus based sauce with a hint of cream) was outstanding and one of the best appetizers for the whole trip. Their avocados are enormous and even more tasty than their small North American counterparts. If you can order this in season on St. Lucia, give yourself a treat!
Posted by The Food Monster at 4:58 AM No comments:

Buzz Seafood and Grill part 1
Their menu claimed that their Garlic Cheese Bread was world famous. 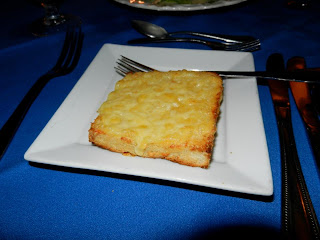 So, we decided to have one of the most Americanized Italian foods at a Seafood restaurant in the Carribean. Wow, it really was good. Lots of gooey cheese (probably 2-3 different kinds), lovely garlic flavor. I'm sure it was dripping with butter underneath and a nice light crunch to the outer part of the baguette. Along with the Avocado and Lobster salad, it was a great way to start off the meal.
Posted by The Food Monster at 5:18 AM No comments:

The Food Monster is now Composting

This weekend I finally acquired a Compost Bin. There are lots of Green benefits to be gained here, less waste in the landfill, cheaper soil for plants, keeping the nutrients in the soil, less bagged leaves etc, but now I will have nutrient rich soil with which to grow my herbs. It comes full circle for this blog when I eat those herbs and vegetables. I am after all The Food Monster.

Composting is easy, and if you find yourself eating bananas, eggs, and other foods that will leave scraps, maybe you should give it a try.
Posted by The Food Monster at 5:09 AM No comments:

Happy Thanksgiving from The Food Monster. Food I lobbied for this year.

When that got rejected, Bojangles seasoned deep fried turkey.

When that got rejected, more stuffing. I'll be getting my eat on at the in-laws. So excited for all of the good food!
Posted by The Food Monster at 5:12 AM No comments: